According to ROS, Santos prediction that Ginebra will make it to the Finals is disrespectful. See list of statements

By Admin at July 23, 2018
Rain or Shine Elasto Painters alternate Governor Edison Oribiana, will not be silenced by anybody if he thinks his team is being disrespected and insulted. 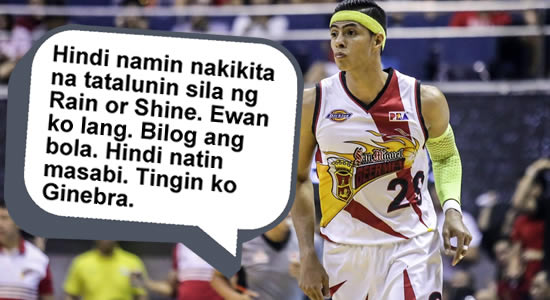 Last night (July 22, 2018), after the SMB successfully won their series against the Alaka Aces, Santos said the following during his interview with the media:


According to ROS, Santos prediction that Ginebra will make it to the Finals is disrespectful. See list of statements

Now, here are the list of strong statements of alternate ROS Governor against Arwind Santos statements.

"As alternate governor of RoS, I take offense in Arwind Santos statement that there is no way our team will beat Ginebra in this series. What makes him so sure about his statement, does he know something we don’t?"

"Time and again we have showed that we can beat Ginebra on any given Sunday. We have the talent, skills and motivation to beat them. What I don’t understand is how this player can issue a statement that is a blatant disregard for respect to another team who is trying its very best to reach the finals."


"This is an insult to the entire Rain or Shine organisation and its fans and I cant take this sitting down. We will not be bullied and cower in defeat. This gives us extra motivation to “dare to dream” and achieve what Mr. santos said as “impossible."

"Probably success has clouded this players mind in his little head that he did not realise that his arrogance has no place in basketball. Basketball should be about respect, integrity and humility which we intend to uphold and be an inspiration to the youth and the entire Filipino nation."