List of June Mar Fajardo's Statements, WHY he didn't join the brawl

By Admin at July 05, 2018
Here are the powerful messages of the 4-time MVP of the PBA June Mar Fajardo who was one of the three members Gilas who didn't join the brawl against the Aussies last July 2 in the FIBA World Cup Asian Qualifiers held at Philippine Arena. 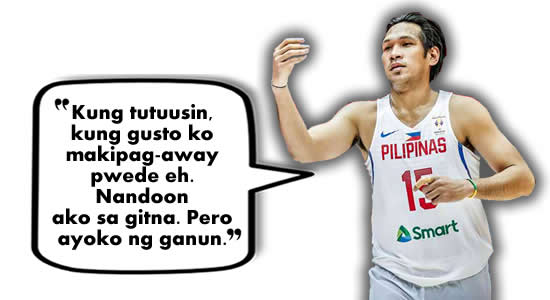 See his simple statements below why he chose not to do the unthinkable.


List of June Mar Fajardo's Statements, WHY he didn't join the brawl

June Mar stated that if he joined the commotion, for sure he will regret what he will going to do. That's why he just avoid to make any contact on any of the Aussies. For him it is still up to him whether he will engage or not, but he chose not to because he don't want any fight. See his official statement below.


He also said that his mom was there watching, and that his parents always told him not the get involved in any fights. See his official statement below.

He also said that in times of heated situation, if you need to walk away, just walk away, because instead of cooling down sa intense moment you are just going to intensify it by participating on it. See his official statement below,