LIST: Statements, who's the team to beat this 2019 Philippine Cup?

By Admin at January 09, 2019
Here are the official statements of all the PBA Governors regarding the "team-to-beat" this coming 2019 PBA Philippine Cup. 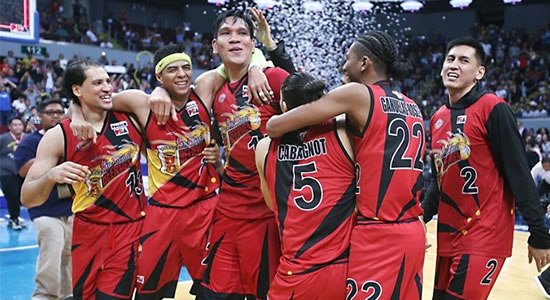 See the official statements below.


LIST: Statements, who's the team to beat this 2019 Philippine Cup?

Alfrancis Chua - Ginebra:
"Of course, San Miguel is the team to beat. It's all-Filipino, so lahat dito iniisip how to stop June Mar."

Raymond Zorrilla - Phoenix:
"SMB is gunning for its fifth straight and they're the benchmark."

Silliman Sy - Blackwater:
"San Miguel will be one of the toughest teams to beat, but as strong as the other teams are, I'll bet my money on San Miguel."

Bobby Rosalies - Columbian:
"Kumpleto ang lineup ng mga teams sa San Miguel group." Rodrigo Franco - NLEX:
"There are no secret with those teams. San Miguel is the strongest team, the team to beat. Magnolia is coming from a championship, so that's another plus for them, and Ginebra will always be a strong team."

Mamerto Mondragon - Rain or Shine:
"We've tried to strengthen our team and we're already able to solve our problems involving our coach and players."

Erick Arejola - NorthPort:
"We've got a good rookie, so hopefully we can enter the quarters or even semis this conference."

Ricky Vargas - TNT:
"Everybody is a team to beat. You go to the game saying we will win, and you don't go there saying you will lose. So I think, really, it's TNT on my mind."