By Admin at May 21, 2019
All the future teachers throughout the Philippines are anxiously waiting for the released of the LET or Licensure Examination for Teachers passers conducted last March 24, 2019 in different testing centers by the Professional Regulation Commission (PRC). 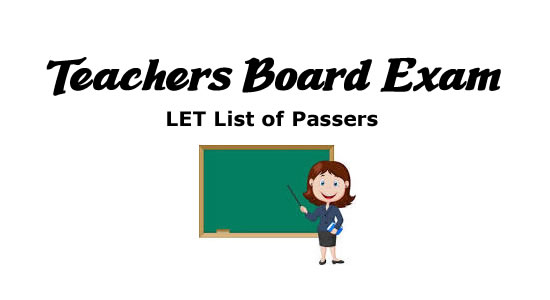 The list of passers both for the elementary and secondary future teachers are expected to be released by May 23, 2019 which is exactly the 40th day after the exam. The prediction was based in last year's LET results released which was also the same date.

Personally, I am also praying for someone to finally pass her LET exam. She already took the exam many times but never passed. But I hope this time she will passed not only for herself but most specially for her son. She already cried so many times because of the failure. And we always encourage her that the right time will come for her. And hopefully this LET held March 24, 2019 was the time.

On the other hand, annually, there are over hundred thousand examinees of LET throughout the Philippines and only few of them got the license to be a Professional Teacher. The hard thing is, I also knew someone who already passed the LET exam for about 3 years already, but she is not getting any permanent position to teach in a permanent school. This woman is always just a substitute teacher which is (for me) very frustrating.

Enough of the long story and let us all hope for the best that those who really need to pass the exam passed it and get hired immediately.

Now, here is the list of all the passers for the March 2019 LET. According to PRC, there is a total of ___ out of ____ passed in the elementary level while ____ out of ____ in the secondary level. See the passers below which is listed alphabetically.

All the links will be updated when PRC releases the official list of LET passers. Bookmark (press CTRL + D) this page for easier access in the future.