By Admin at July 20, 2020
Here is the list of some of the most beautiful birds (pet or wild) with the shortest or abrupt lifespan in the world. Also included on this list are the birds that can live over 20 years old but still too short compared to humans and as well as the other animals. See the list below in no particular order or ranking. 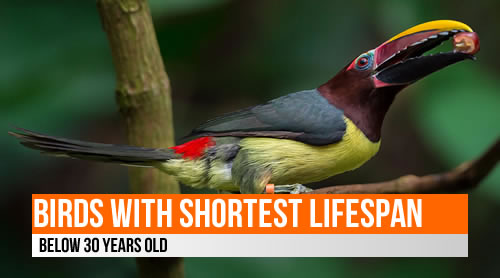 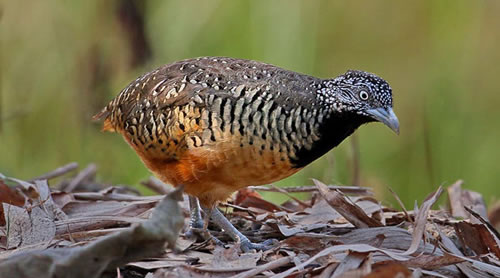 2. The budgerigar is a long-tailed, seed-eating parrot usually nicknamed the budgie, or in American English, the parakeet. Budgies are the only species in the genus Melopsittacus. Naturally, the species is green and yellow with black, scalloped markings on the nape, back, and wings.
Lifespan: 5 – 10 years (In captivity)
Family: Psittaculidae
Clutch size: 4 – 6
Scientific name: Melopsittacus undulatus
Length: 18 cm (Adult, In the wild)
Mass: 30 – 40 g (Adult, In the wild) 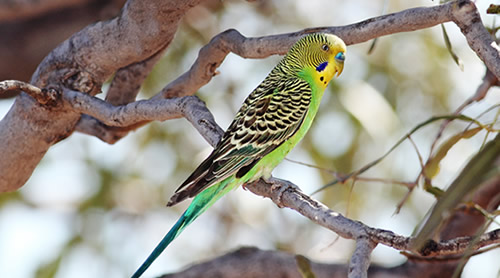 3. The domestic canary, often simply known as the canary, is a domesticated form of the wild canary, a small songbird in the finch family originating from the Macaronesian Islands. Canaries were first bred in captivity in the 17th century. They were brought over by Spanish sailors to Europe.
Family: Fringillidae
Scientific name: Serinus canaria domestica
Class: Aves
Kingdom: Animalia
Higher classification: Atlantic canary
Lifespan: Can live 5–10 years on average, but some can live up to 15 or even 20. Red factor canary: 10 years, Harz Roller: 10 years. 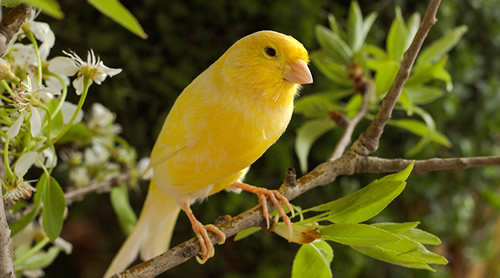 4. The domestic pigeon is a pigeon subspecies that was derived from the rock dove. The rock pigeon is the world's oldest domesticated bird. Mesopotamian cuneiform tablets mention the domestication of pigeons more than 5,000 years ago, as do Egyptian hieroglyphics.
Family: Columbidae
Kingdom: Animalia
Scientific name: Columba livia domestica
Class: Aves
Order: Columbiformes
Higher classification: Rock dove
Breeds: Homing pigeon, Racing Homer, Fantail pigeon, Indian Fantail, English Carrier pigeon
Lifespan: Pigeons have short life spans of around 5 years in the wild, but in captivity, they are said to live about 15 years. One individual was recorded at 33 years. 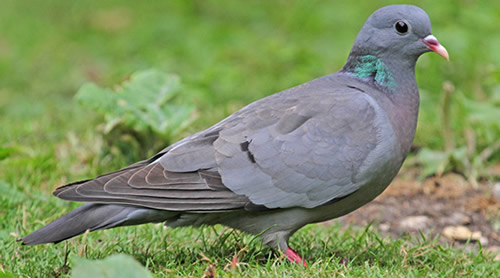 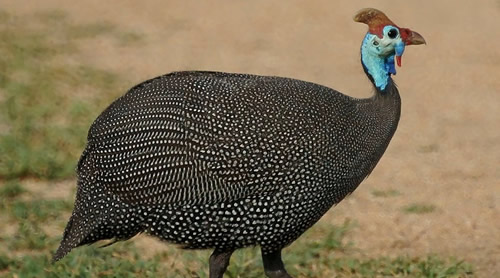 6. Lovebird is the common name of Agapornis, a small genus of parrot. Eight species are native to the African continent, with the grey-headed lovebird being native to Madagascar.
Lifespan: 10 – 15 years
Scientific name: Agapornis
Clutch size: 4 – 6
Family: Psittaculidae 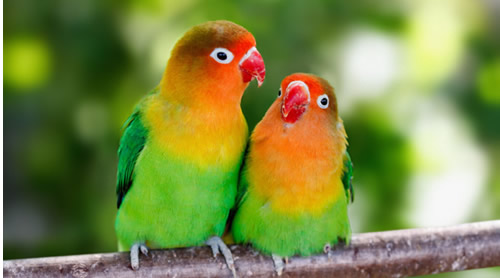 7. Parrotlets are a group of the smallest New World parrot species, comprising several genera, namely Forpus, Nannopsittaca, and Touit. They have stocky builds and short tails and are endemic to Middle and South America. In the wild, parrotlets travel in flocks ranging in size from about four to over a hundred birds.
Lifespan: These tiny birds are said to have a life span of 12–20; however, some owners have reported higher, possibly up to 30.
Family: Psittacidae
Order: Psittaciformes
Class: Aves
Mass: Pacific parrotlet: 26 g, Green-rumped parrotlet: 24 g, Mexican parrotlet: 34 g
Representative species: Pacific parrotlet, Green-rumped parrotlet, Spectacled parrotlet, Blue-winged parrotlet, Yellow-faced parrotlet 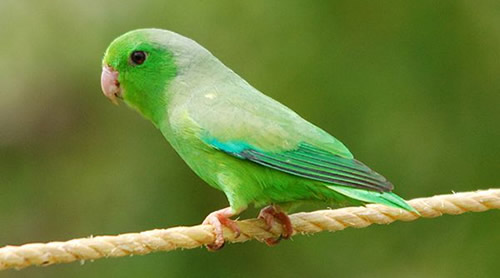 8. The zebra finch is the most common estrildid finch of Central Australia and ranges over most of the continent, avoiding only the cool moist south and some areas of the tropical far north. It can also be found natively on Timor island. The bird has been introduced to Puerto Rico and Portugal.
Lifespan: 2 – 5 years (In the wild). They can live around 5 years in the wild and 5–9 years on average in captivity. One individual lived to 14.5 years.
Family: Estrildidae
Clutch size: 2 – 7
Length: 10 – 11 cm
Scientific name: Taeniopygia guttata
Mass: 12 g 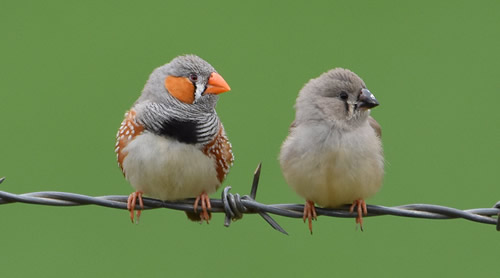 9. The cockatiel, also known as weiro bird, or quarrion, is a small parrot that is a member of its own branch of the cockatoo family endemic to Australia. They are prized as household pets and companion parrots throughout the world and are relatively easy to breed.
Lifespan: In the wild, these immensely popular and affectionate birds can live 10–14 years, but in general most well-cared-for birds live about 20 years. There have been individuals exceeding this number, however, up to 32.
Family: Cacatuidae
Length: 30 – 33 cm (Adult)
Scientific name: Nymphicus hollandicus
Mass: 90 g (Adult)
Order: Psittaciformes
Breeds: Whiteface lutino cockatiel, Ashenfallow Cockatiel, Bronzefallow Cockatiel, ADMpied Cockatiel 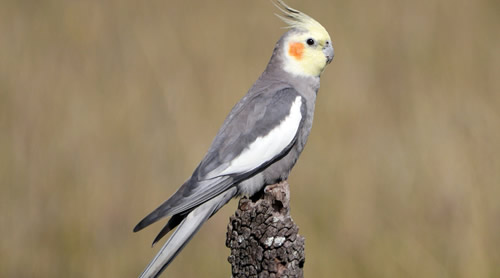 10. Conures are a diverse, loosely defined group of small to medium-sized parrots. They belong to several genera within a long-tailed group of the New World parrot subfamily Arinae. The term "conure" is used primarily in bird keeping, though it has appeared in some scientific journals.
Conure bird: Parrots, Green-cheeked parakeet, Sun conure, Cockatiel, Budgerigar
Lifespan: Conures are popular meduim-small parrots with life spans that vary from 20–25 to 30 years. 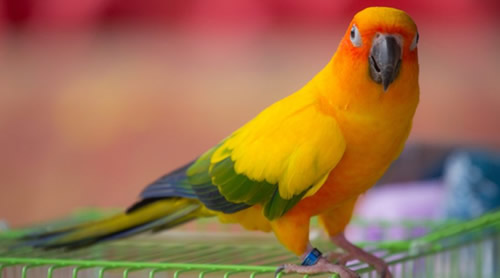 11. The green aracari, or green araçari, is a toucan, a near-passerine bird. It is found in the lowland forests of northeastern South America, in the northeast Amazon Basin, the Guianas and the eastern Orinoco River drainage of Venezuela.
Lifespan: They can live 20 years, with 26 being the longest recorded.
Scientific name: Pteroglossus viridis
Higher classification: Aracari
Phylum: Chordata
Order: Piciformes
Rank: Species
Class: Aves 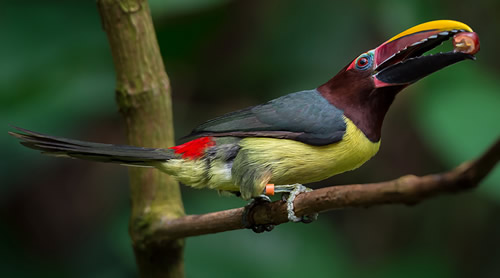 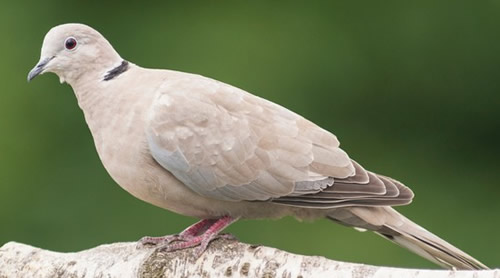