List of Security Features of Banknotes and Coins Philippines

By Admin at May 01, 2018
Here is the list of all the security features and uniqueness of all the banknotes (bills) and coins here in the Philippines.


List of Security Features of Banknotes and Coins Philippines

1. Feel the paper and embossed prints. The genuine note is printed on a special kind of paper (made of cotton and abaca) using printing techniques that make some details of the note embossed, thus, it is rough when you run your fingers through it. The watermark, security threads and iridescent band (NDS only) were incorporated on the paper during the production process. 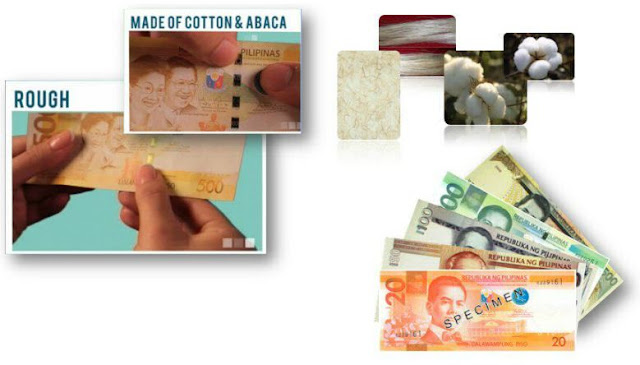 2. Examine the watermark on the unprinted portion of the note. The watermark is the silhouette of the portrait appearing on the face of the note. Sharp details of the light and shadow effect can be seen when the note is viewed against the light. 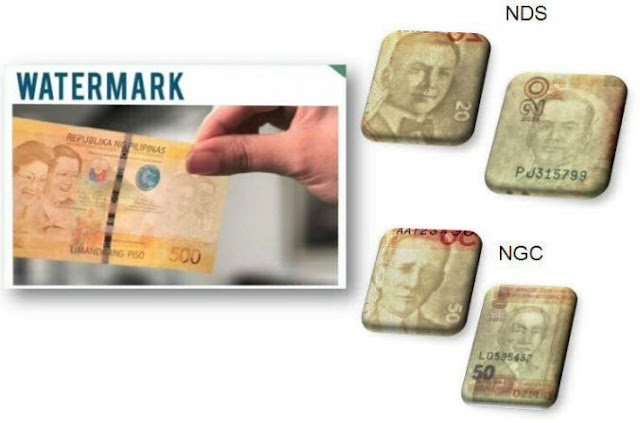 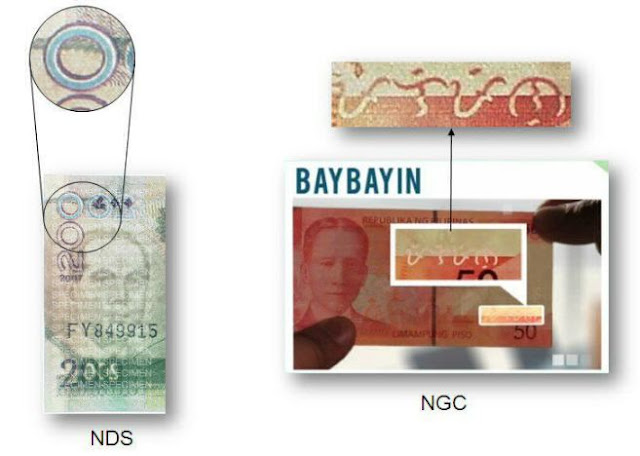 4. Inspect the security fibers. Embedded red and blue visible fibers are scattered at random on both surfaces of a genuine note. 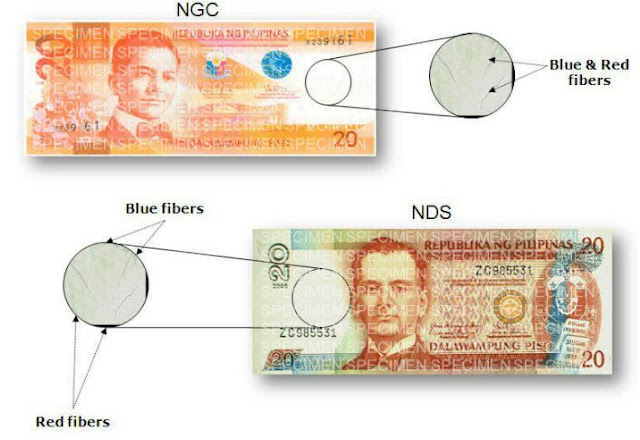 5. View the embedded security thread. This ccan easily be seen when the note is viewed against the light. It appears as a broken line in 20-psio NDS note and a straight line in 50 up to 1000-piso NDS notes. For NGC, this embesdded thread is wider and present only in 20 and 50-piso denominations. 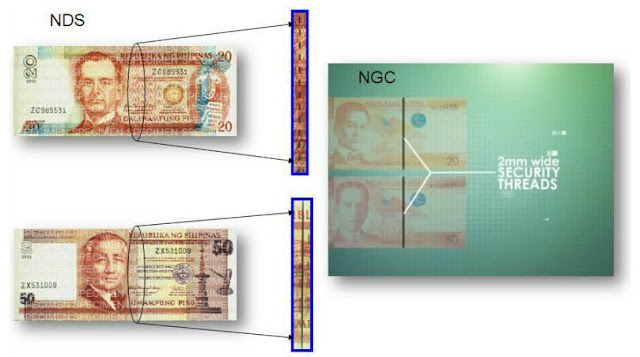 6. View the windowed security thread on the improved version of NDS and on the NGC notes particularly the denominations 100's, 200's, 500's and the 1000-piso notes. The windowed security thread appears like "stitches" which is vertically located at the face of the note. For NDS, it is a thin metallic strip that changes in color from magenta to green (and vice versa) that bears a clear text of the numerical value in repeated sequence. For NGC, it is a 4 mm wide metallic thread that changes color from red to green (and vice versa) that bears the initials "BSP" and the numerical value in repeated series. 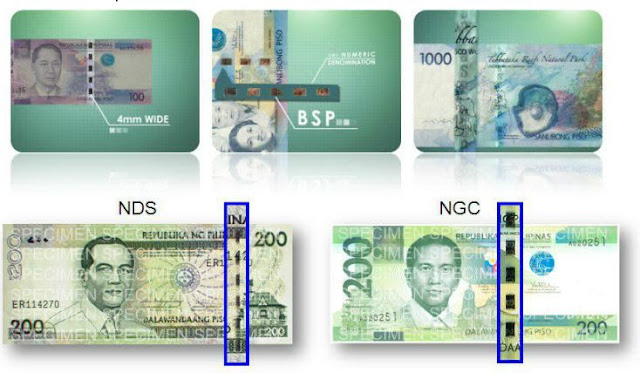 7. Look for the iridescent band on the improved version of 100's, 200's, 500's, and 1000-piso NDS notes. A wide glistening gold vertical stripe with the numerical value printed in series. 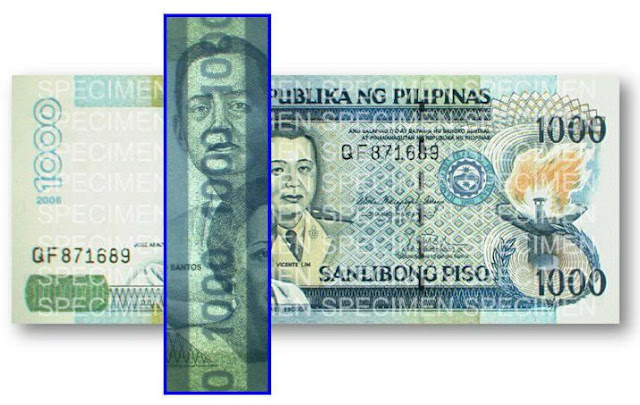 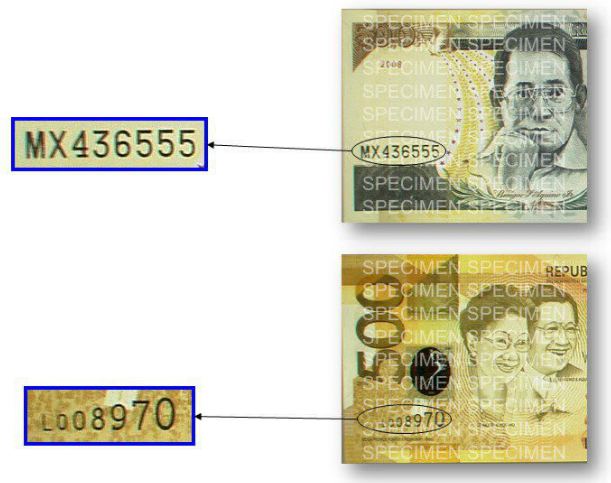 9. Check the concealed value. This concealed value is located at the lower left corner of the face of the 500-piso NDS note and upper left portion of all denominations in the NGC notes that is recognizable only when viewed at the correct angle. 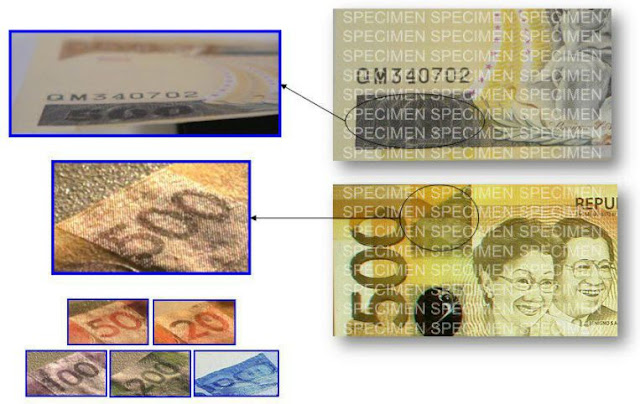 10. Check the optically variable ink (OVI) on the 1000-piso denomination. It changes color from green to blue or blue to green when the note is held at different angles. 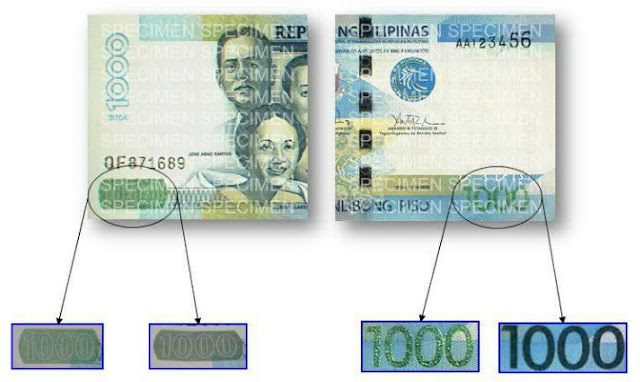 11. Optically Variable Device (OVD) Patch. A reflective foll that bears the image of the Blue-naped Parrot for 500-piso, South Sea pearl inside a clam for 1000-piso and a small BSP Logo. The color of the calm and the parrot changes from red to green when the note is rotated at 90 degrees. 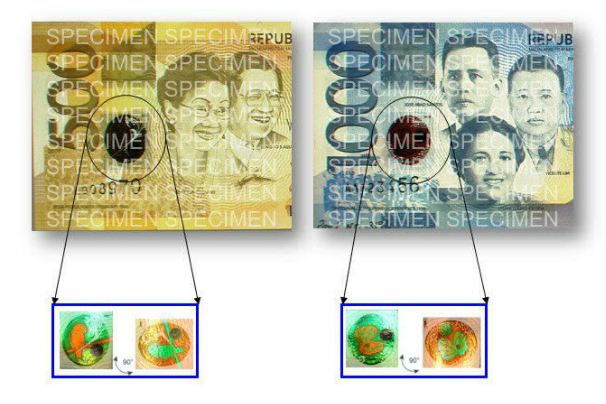 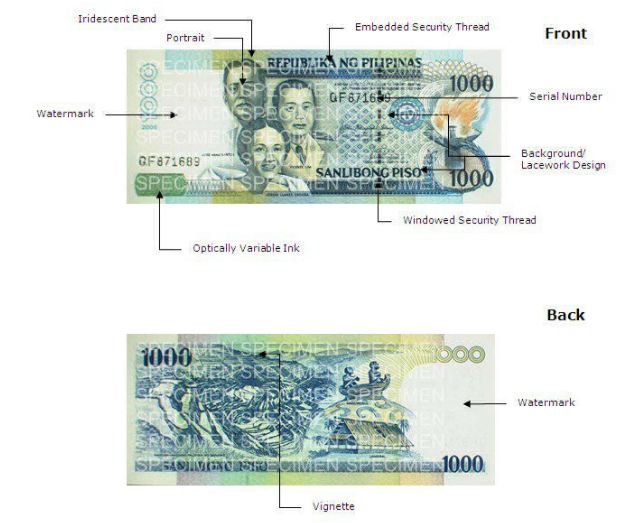 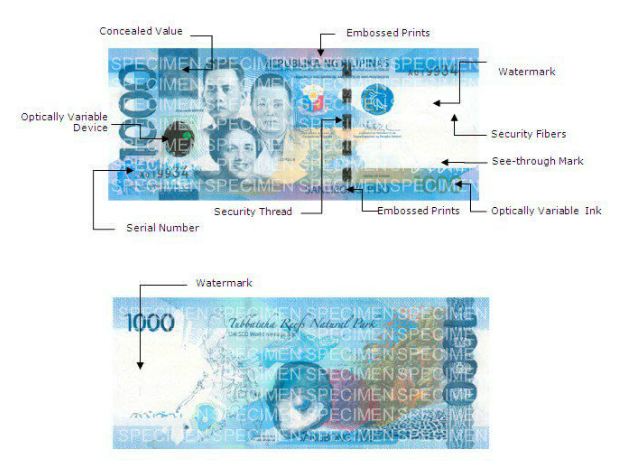 14. BSP Coin series: Counterfeit vs. Genuine. Generally,  genuine coins show an even flow of metallic grains; the details of the profile, the letterings and numerals are well defined; and the "reedings" or "corrugation" on the sides of the coin, if there are any as in 10-piso, 1-piso and 10-sentimo, are deep and even. 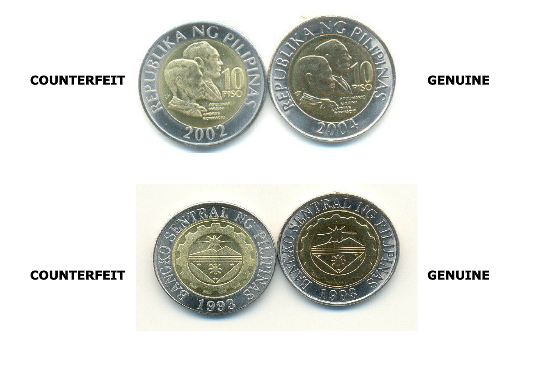 15. Genuine 5-piso coins Front design. Counterfeint 5-piso front design. Note: Font  of the letterings in counterfeit is bigger than the genuine; the eye is not defined. 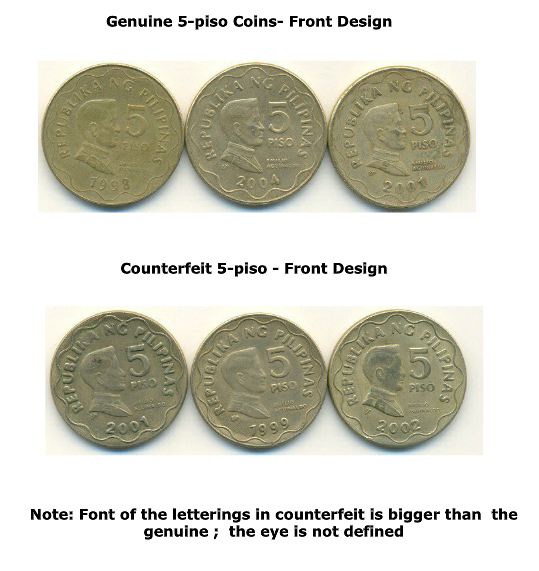 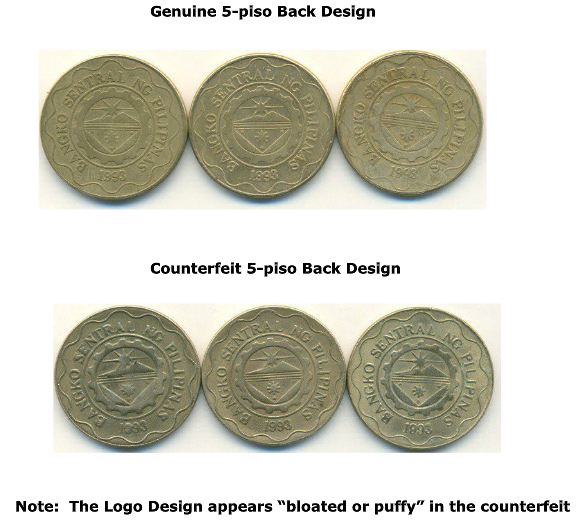 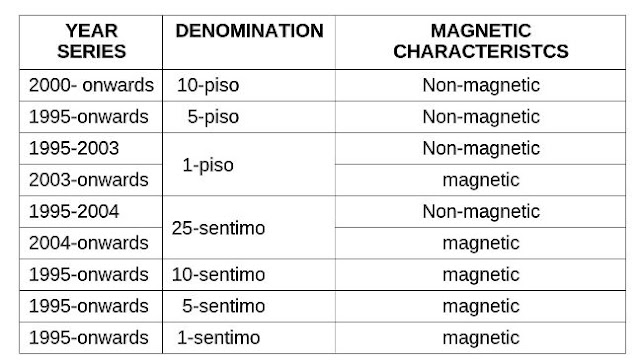 18. The design features of each coin denominations in circulation are summarized below: 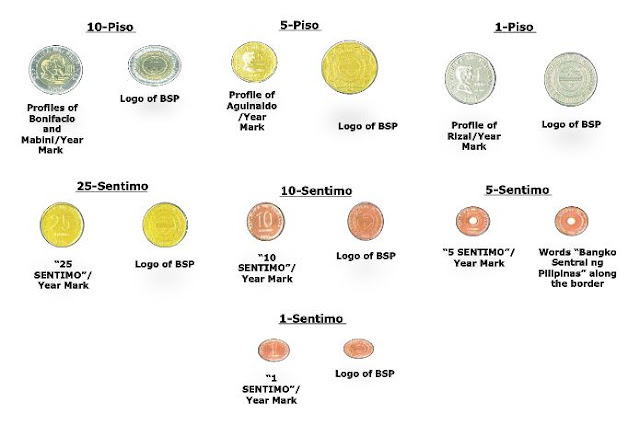