List of Current Banknotes and Coins in Circulation in the Philippines 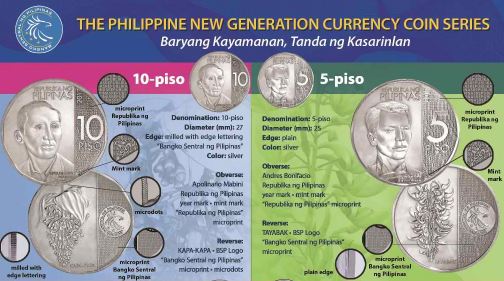 
List of Current Banknotes and Coins in Circulation in the Philippines

BSP Coin Series (1995 - Present)
In 1995, a new set of coins and notes was issued which carried the logo of the new BSP: 5- and 1-piso and 25-, 10-, 5- and 1-sentimo. On July 10, 2001, BSP issued the 10-piso coin for general circulation to commemorate its 8th year anniversary. It has the profiles of Andres Bonifacio and Apolinario Mabini in a con-joint or in tandem manner on the obverse side. The reverse side bears the seal of the Bangko Sentral ng Pilipinas which is consistent with the common reverse design of the other six denominations. This has been an additional denomination to the current coin circulation and a replacement for the 10-piso NDS banknote.

New Generation Currency Banknotes Series (2010 - Present)
In 2009, the Bangko Sentral ng Pilipinas announced that it launched a massive redesign for current banknotes and coins to further enhance security features and improve durability. The members of the numismatic committee include Bangko Sentral Deputy Governor Diwa Guinigundo and Dr. Ambeth Ocampo Chairman of the National Historical Institute. The new banknote design features famous Filipinos and iconic natural wonders. Philippine national symbols will be depicted on coins. To provide a smooth transition from the New Design Series to New Generation Currency series, BSP purposely retained some NDS features, such as, the size, predominant colors and the featured personalities in the NGC, except for the portrait of President Corazon Aquino which is an added

portrait on the 500-piso note. The BSP started releasing the initial batch of new banknotes on December 16, 2010. The NGC will co-exist with the NDS approximately until 2014, while BSP is building up its capability to print and produce NGC banknotes with the latest anti-counterfeiting security features incorporated through advanced technologies, benchmarked worldwide. Color plays an important part in the design, accentuating key elements such as value numerals, seals and note edges. The inclusion of large intaglio printed numbers on the front differentiates each denomination to provide assistance for the visually impaired.

The NGC Coin Series design features enhanced the aesthetics and security of the coins. In particular, micro-printed details using laser-engraving technology were included in the two highest denominated coins, the 10-Piso and 5-Piso, which makes it difficult for these coins to be duplicated using traditional coin counterfeiting methods. The metallic composition of the NGC coins also discourages the illegal practice of hoarding large quantities of coins for the extraction of their metal content.

The coins, which appear as "metallic silver", are made from durable nickel-plated steel that possess very good wear and corrosion resistance. The change in material addresses concerns on discoloration predominantly observed for copper-based metals.

Coins in the NGC Series will feature the new BSP logo, three national heroes (Apolinario Mabini in the 10-Piso, Andres Bonifacio in the 5-Piso and Jose Rizal in the 1-Piso), a stylized three stars and a sun in the 25-, 5- and 1-Sentimo, and endemic flora consistent with the design of the NGC Banknote Series that highlights Philippine fauna. 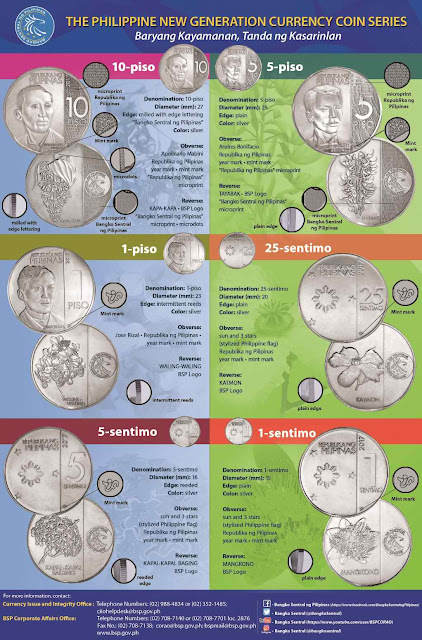 Watch the video below to see the actual new coins.