By Admin at July 30, 2018
Coach Leo Austria of the San Miguel Beermen earned praise to Ginebra living legend Robert Jaworski Sr.. According to the report of Spin.ph the two greeted each other after Game 2. 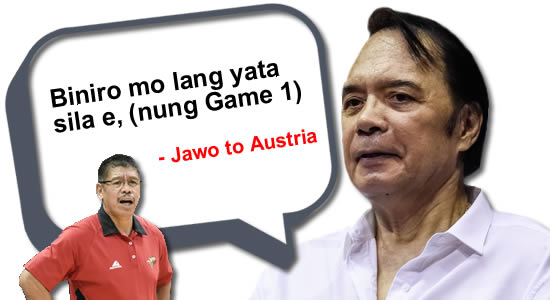 According to Austria, Jawo praised him and said good adjustments has been made. See official statement below:


Even though Austria is coaching SMB, it is clear now that he also idolized Jawo. See statement below:


Austria even added that his whole province is a Toyota country, wherein Jawo used to play. See official statement below:


Coach Leo also said that Jawo joked about the Game 1 result, see the words below: