We are sister teams but we are not friendly - Cone, see list of statements

By Admin at July 30, 2018
Sister team? According to some fans the series between the San Miguel Beermen and the Ginebra San Miguel is scripted. 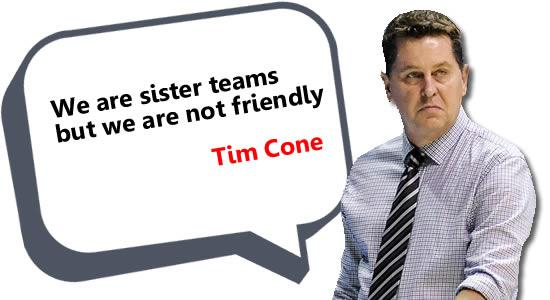 But Coach Tim Cone himself stated that this series will not going to be a friendly match. See the official statements below.


We are sister teams but we are not friendly - Cone, see list of statements

For Cone, yes they are sister teams, but when it comes to the fight there is no such sister team word. See his official statement below.


He also stated that SMB is like a mountain to conquer, see his statement below:


He also said that:


“Right now, their results are higher than ours. You’ll continue to see that series as chippy. I don’t think it’s going to be lay down for the other team. It’s going to come hard.