According to sources: PBA & SBP are reviving the plan to send the ROS core to Asiad, see list of statements

By Admin at August 05, 2018
In the report of Spin.ph, the PBA and SBP are now reviving the plan of sending the core of the Rain or Shine Elasto Painters plus reinforcements from other teams, and Coach Yeng Guiao as the head coach. 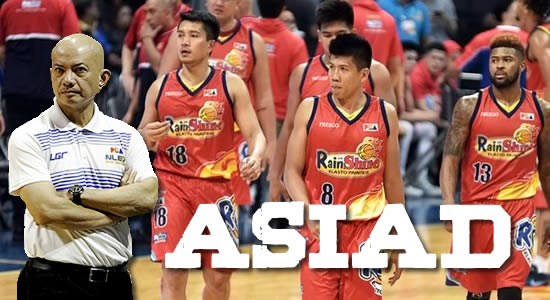 
According to sources: PBA & SBP are reviving the plan to send the core of ROS to Asiad, see list of statements

Highly placed sources said members of the PBA board and officials of the country's basketball body have come up with a common stand, just weeks after a controversial decision by the SBP to abandon plans to send a team to the Asiad.

In fact, officials led by SBP head Al Panlilio and PBA commissioner Willie Marcial are set to hold a press conference at 6 p.m. at the Smart Araneta Coliseum press room, ahead of Game 5 of the San Miguel-Ginebra finals for the Commissioner's Cup title.

According to sources, members of the PBA board will sit down and meet with coach Yeng Guiao before the press conference to finalize details of the revived Asiad plan.

Another source stated that, the PBA and SBP are reviving the plan to send the core of a Rain or Shine team plus reinforcements to the Asian Games, with Guiao as head coach.