"If we have a chance to finish it on Wednesday, we have to do it." - LA Tenorio, see list of statements

By Admin at August 06, 2018
LA Tenorio of the Barangay Ginebra San Miguel emphasized that they need to finish the series this coming Wednesday against the San Miguel Beermen and win the championship. He said during the interview that, beating SMB in a Game 7 is going to be more difficult if that situation happens. 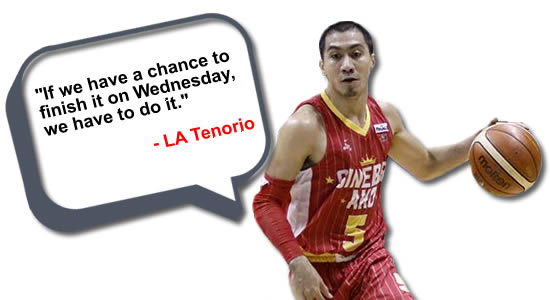 See the official list of statements below by Tenorio.


"If we have a chance to finish it on Wednesday, we have to do it." - LA Tenorio, see list of statements

Accoring to Tenorio, the coming Game 6 will be a tougher one for both teams:


“Siguro doble nito. Siguro we’re expecting, double, triple overtime the next game,” said Tenorio on Sunday as while pondering on the Kings’ 87-83 grind-out win over the defending champion Beermen to move closer to capturing the PBA Commissioner’s Cup championship.


He also said that, Ginebra is a NSD team but SMB is also having the same attitude:


“Closing out the series especially against San Miguel is really hard. We’re not expecting a blowout game again for sure especially with their backs are against the wall,” said the veteran guard. “Alam naman natin ang San Miguel magaling din sa ganyan. We have a never-say-die spirit, meron din ganung attitude ang San Miguel.”


Tenorio also praised their composure during the endgame of Game 5, wherein they snatched the win against SMB:


“Ang hirap,” said Tenorio. “The good thing about this is we came out really composed during the endgame. And yun naman ang parati naming pini-preach talaga. Every playoff game, we only need a one-point win. Di baleng pangit ang laro as long na manalo kami, we’ll take it.”


He also stated that even though they are leading the series, they will see it as a do-or-die game:


“Yung mindset namin going to the game on Wednesday is do-or-die for us. We cannot give them a chance na maglaro for a Game 7 dahil mahirap kalabanin ang san Miguel,” he said.


Lastly, he said that if they can pullout a win on Wednesday, they have to, because Game 7 is far more difficult because everyone has the potential to grab the 2018 Commissioner's Cup trophy:


“If we have a chance to finish it on Wednesday, we have to do it.”


Source:
Tenorio warns Ginebra must finish off SMB in Game 6 - or else