“If you are gunning for the World Cup, manalo muna tayo sa Asian Games.” Gomez to SBP, see list of statements

By Admin at August 01, 2018
Living legends Robert Jaworski, and Ramon Fernandez both have the same sentiments about SBP pulling out in the 2018 Asian Games, they were both disappointed. 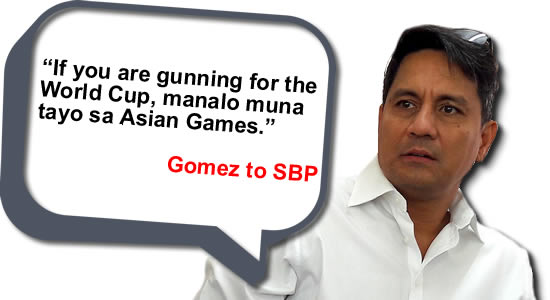 And Richard Gomez the chef de mission of the Philippines in the Asian Games, is also urging SBP that is not too late to reconsider sending a Philippine team that will compete in basketball in Asiad. According to him, the deadline for the submission of final lineup is until August 9, 2018.


Now see the positive statements of Gomez encouraging SBP to reconsider their decision and send a team that will represent our country in the 2018 Asian Games in Indonesia.

“If you are gunning for the World Cup, manalo muna tayo sa Asian Games.” Gomez to SBP, see list of statements

For Gomez, Asian Games is also as important as FIBA World Cup. See his official statements below.


For him, sending a team that will represent our country in basketball in Asiad is a responsibility not only for the National Sports Association (NSA) but most importantly for the Filipino people. See official statement below:


“The fact remains that we have a team. We have to represent basketball in the Asian Games. Parang unspoken commitment na natin ‘yun, di ba? Not just for the NSA but for the Filipino people,” said Gomez.


Goma also said that we need to dominate first the Asiad before really gunning for the World Cup. See official statement below:

He also emphasized that the last time that our country won gold in Asiad was way back 56 years ago. See official statement below:


And for him there are so many pro and talented players that can really play basketball for the country. See the official statement below: