By Admin at August 06, 2018
Here are some of the videos collected from the Game 5 championship match of the Barangay Ginebra San Miguel versus the San Miguel Beermen. 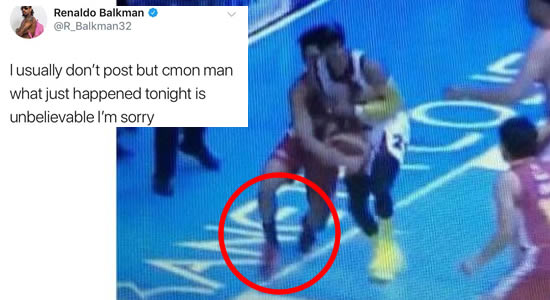 The videos are about the replay of the non-calls made by the referees during the crucial period of the 4th quarter that most SMB fans stated cost SMB the defeat.


Well, the videos will not lie. Sa dikdikan na labanan, those non-calls will really matter at the end of the game. Watch the videos below and be the judge.

Throughout the game Balkman was barking against the refs about those fouls against him that they weren't able to call. Watch the video below.


During the dying seconds of the fourth quarter, Devance motion slightly pushed Chris Ross that made him stepped on the line. Watch the video below.

The video below was also during the dying seconds of the game wherein Brownlee was clearly stepping on the line also.


Arwind Santos and Scottie Thompson were scrambling for the ball. Clearly, Thompson was stepping on the line, but the refs called the play in favor of Ginebra instead.


The crucial travelling made by Brownlee wherein there is no call from the refs. This was also during the crucial period of the 4th quarter.