"We all should appreciate the work of the boys." -Guiao, see list of statements

By Admin at August 21, 2018
Coach Yeng Guiao is still proud of his Gilas boys even though they came out short against China. Our Philippine team loss against the Chinese, 80 to 82. 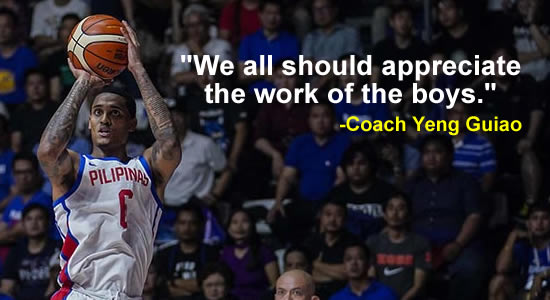 
"We all should appreciate the work of the boys." -Guiao, see list of statements

For Coach Yeng he don't see the loss against China a "loss" because China just escaped and grabbed the win during the dying seconds of the match.


He also stated that our Gilas boys did all the the effort and we should appreciate that:

For him the free throws given to China which is 39 and only 15 in our favor was the big factor of that match. Though China only converted 23 free throws.


"Even if you double our free throws, it's not even enough to match the free throws that they took," Guiao said.


He also praised Stanley Pringle, Christian Standhardinger, and JP Erram for their efforts.


Still, Guiao prefered to stick to the positives, praising the performance of guard Stanley Pringle ("Outside of Jordan Clarkson, he played really well") and his bigs led by Christian Standhardinger and Poy Erram ("The size difference was just huge, but they gave it their all.")

Coach Yeng also insisted that with the small amount of preparation for the Asiad and the team played that kind of basketball, for him that's a very good performance.


"We formed this team two weeks ago. Then we flew in Clarkson four, five days ago. So with that amount of preparation, this is a really good performance," said the many-time PBA champion coach.

Source:
Yeng Guiao: 'We all should appreciate the work of the boys'