By Admin at April 04, 2020
If you wanted to play a basketball game on your laptop or desktop computer other than the very popular NBA 2K, then you can try downloading and installing the Incredi Basketball. 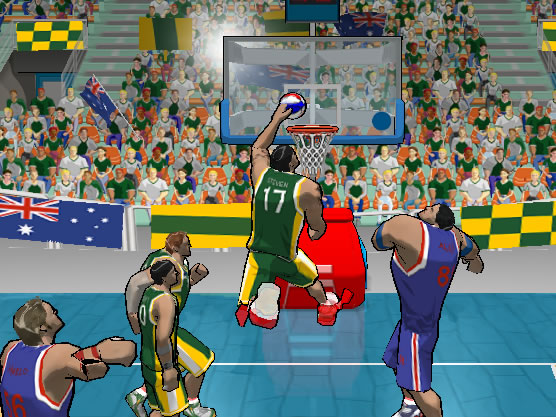 Owned by the House of Moves Incorporated, this game is a combination of natural basketball game with some special moves that made it very cool to play.

Unlike the NBA 2k that weighs over 50GB, Incredi Basketball's size is only over 150MB. And if you are only using data-type connection of internet, then you can easily download this game on your computer.

The only downside of this game is that there is no option for a LAN game. That only means that you cannot play against your friend, but only against a computer.

Quick Game
Under the Quick Game menu, you have the following:
1. Friendly Match - the basic basketball game of 5 vs 5. You can also select your own team which is a country team like the USA, Spain, Brazil, Canada, China, Turkey, Argentina, Australia, and more.
2. 1 vs 1 - You against the computer.
3. 3 Points Star - this will test your outside shooting against the computer
4. 3 Points Against Time - same as the 3 Points Star but with a timer
5. Free Throws Against Time - within a minute you will simultaneously play against the computer throwing free throws, the one with the highest made will be the winner.
6. Free Throws Consecutive - unlike free throws against time, you this one is untimed.

Events
1. Championship - you will be prompt to create a tournament and select your own favorite team to play. It is also same as the Friendly Match wherein you will be up against the computer in a 5 vs 5 game play. You can also save this game for future playing. Its a long tournament so better do your best to win as many game as possible.

2. Incredicup - you will be also playing against the computer. There will be pairing within 2 brackets comprised of 8 teams. You have to win against the team that you are paired to be able to reach the Finals against the winner of the other bracket. You will be facing a total of 3 different teams for this event.

3. Custom Event - you will need to name your Event. Then choose how many teams you wanted to have in your event. For playoff round you can choose best-of-1, 3 or 5 series. For round 2, you have to choose between 1 or 2 legs as well as the qualifying number of teams from each group. For round 3, this will be same as round 2. And for the last round you can select whether it will be just a round or a playoff. When done you can start playing the custom event that you have created.

Training
If you are not yet ready to face a computer then you can try Training first.You have there the 1 vs 1, Free throws, and the Free Play option. You can basically practice your shooting here as well as the way to dunk the ball using the special moves and practicing shooting the ball beyond the arc.

Editor
Using this option will allow you to edit the players.

1. Game Settings - you have here the Difficulty which is Low, Medium and High. The lower the difficulty the lesser the ability of the computer to win against you and vice versa. You also have the Length which is 5 minutes in max and 2 minutes minimum. For the Cut Scenes you can set it to yes or no. And lastly, the Ball Marker that you can also set to yes or no.

2. Graphic, Audio, and Camera Settings - I will not go into details because you can customize this section to whatever suits you and your computers performance capability.

3. Configure Controller - when playing Incredi Basketball using your computer, the only option to control it is using your keyboard. And inside the configure controller you will see all the controls to be able to pass the ball, steal, block, shoot, etc. You can also edit these controls for your convenience.

1. If you are just a newbie you need to set the Difficulty in Low so that you will not going to be demolished by the computer. That's the thing that I thought but even though I set the difficulty to Low already, I was also demolished by my computer enemy during my first try.

2. To be able to make special dunk moves. You only need to step back first and then go forward while simultaneously pressing the dunk key. Example, if your side of the court is the left then you need to press the right arrow key a little to gain some momentum and then press the left arrow key together with the dunk key. When you done it, you will be amazed that your player can do special dunk moves.

3. Now, to be able to do some special moves. You need to have enough energy under your team which is the green bar below team's name and score.The bar is divided into 3 bars. Here are the special moves that you can do inside Incredi Basketball.

a. The Flame Shot - you need a full bar of energy to be able to do this move. To call the move just press X key + F key (simultaneously). Pressing the key will activate the Flame shot. You need to pass the ball to the center of your team and then move your center beyond the arc to shoot the 3-point shot. The shot is 100% doable. Using Flame shot will nullify the rim lock as well as the ability of the other team to block your shot. For short, this shot is absolutely unstoppable. You can take the shot anywhere inside the court. 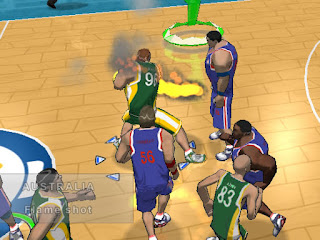 b. The Alley oop - You need a full 1 bar to be able to do this move. Just press X key + S key (simultaneously) while facing the basketball. You need to face the rim to be able to do this trick. The ball should be handled first by your point guard and then press the designated keys and just let the whole thing happen by itself.

d. The Tower - small amount of energy will enable you to do the move. Just press the keys X + A on your keyboard simultaneously. Your 3 teammates will stand side-by-side and the shooter will sit over them. The ball handler will then pass the ball to the shooter to take the shot. If done outside the arc and converted that will be a 3-point while if inside the arc that will be a 2-point. 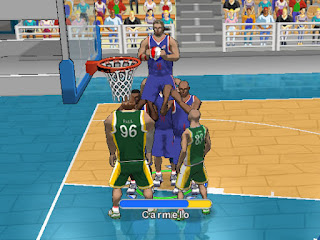 Note: I changed the activation of super moves key to Letter X for my own control. You can simply change the letter X with your own.

Upgrades Appearing Inside the Court 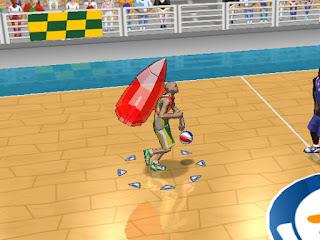 b. The Green kinda lightning thing - when your player step on it and stayed inside it for a while, your team's energy will increase up to 3 bars or full at maximum. The energy enables you to do the super moves as discussed earlier. 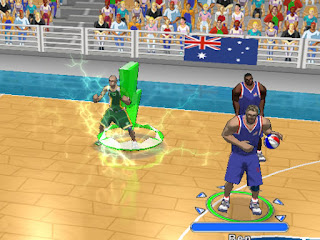 c. The Blue Lock (box) - when your player step on it, this will lock your opponent's rim disabling them to make any shot. Although, this lock is breakable by any of the super moves. 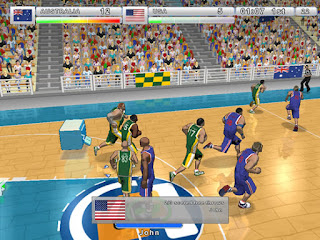 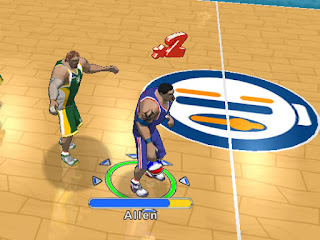 f. The Reverse score  (red 2-arrow circle) - be careful when using this one. If you are in the lead and you make a 3-point shot, the score will be reversed by this upgrade. Example, the score is 50 to 30 (you are leading by 20 points). When you get this upgrade and you shoot a 3-point shot and made it. The score will then be reverse to 30 to 50, you are now trailing by 20 points instead of leading. You only need this upgrade when you are trailing by a large margin. But if you only shoot a 2-point shot then this is useless. 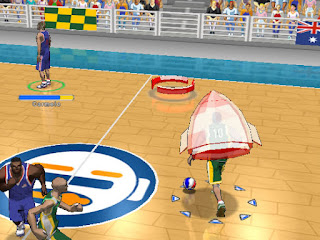 g. The Red Shoe Accelerator - this will enable your player to move faster than anybody. 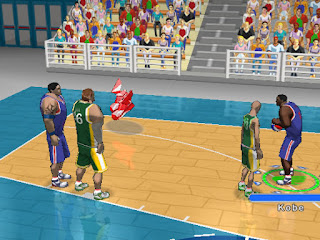 h. The Green Tunnel - this will allow you to take shortcuts without the need to dribble the ball from the other side of the court up to the other. Doing so will gain you a little advantage of taking a doable 2-point or 3-point shot. 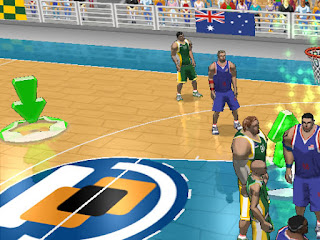 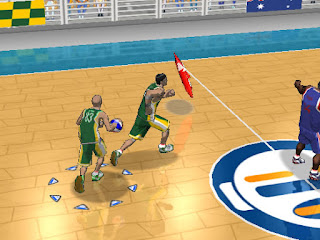 j. The Blue Hand Glove - this will enable your player to have extended defense and hand against your opponent. 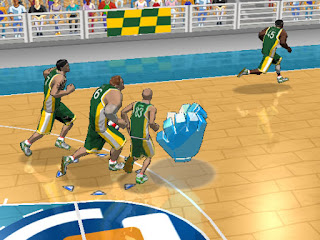 Now, its your time to play this simple yet amazing game of Incredi Basketball. When you've done so, please share us your thoughts by using the comment form below.

I can say that I am a master of this game already and I have unlocked so many teams by playing different kind of events. The first week of playing the game, well, I will admit that I was totally ripped by the computer but when I mastered Incredi Basketball, I am now ripping every opponent that I am facing in a 5 vs 5 quick game or tournament.
Newer Post Older Post Home