They gave me two techs for nothing - Ross, see list of statements

By Admin at July 29, 2018
Chris Ross was ejected during their game 2 match against the Barangay Ginebra San Miguel after getting a 2nd technical foul in the 5-minute mark of the 4th quarter. 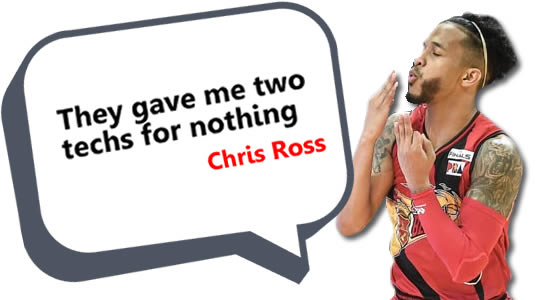 Ross and Joe Devance got into something during the rebound play. You can watch the replay here. But still, Ross emphasized that he didn't do anything and do not deserve the 2 technical fouls given to him.


They gave me two techs for nothing - Ross, see list of statements

Although he was ejected, what's important for him is they got the win and they tied the series. See his official statement below.


“We won, that’s it. The technicals, I don’t think I deserve them but the referees called them so I’ll live with it. As long as my team won, that’s all that matters,” Ross said.


For him, the style of the game they played during game 1 was like a tuneup game, that's why they lost to Ginebra. See the official statement below.


He also stated that their import Renaldo Balkman motivated them during practice to come up strong in Game 2. See the official statement below.


“Balkman kinda pumped us up during practice. The coaches made the right adjustments and it worked.”